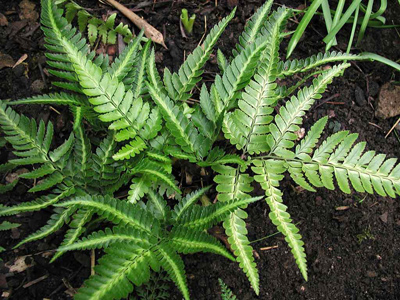 For those of you who are saying to yourself, 'give me anything that will not freeze', this is the fern for you. This is a picture of mine with the dusting of snow that we got in February. This fern does very well in part shade to full shade. I have found once established it is pretty drought tolerant, has taken our hot summers well, and took our cold spells of the last two winters without missing a beat.

The East Indian holly fern is a Hardy fern for us and evergreen. It is a medium-sized fern, about 18'' tall and wide. I have found it to be a slow grower, but pretty self-sufficient, not needing much in the way of grooming. Other than its hardiness, it is grown for its dark green leaves with a burst of yellow/gold down the center of the midrib of each lance-shaped leaf. The leaves are very spaced out and there are not a lot of them. It is not the greatest for a potted plant, but looks nice in the ground and in groupings of three spaced out about 18''.
I really like this fern!! For this fern, I would buy a large one now. Watching it grow up from a starter is almost like watching paint dry.