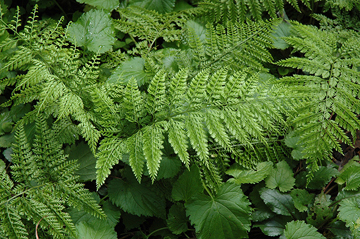 The Upside down fern. After our last two winters I think most of us are looking for something that will be pretty and still alive during those cold January mornings, and yet still alive after a weeklong of our over 100F in our brutal summers. If so this is the fern for you!
It received its name because when you look at the leaves themselves they look like you're looking at the underside of most ferns. The veins are prominent on the upper side of the fronds surface rather than the more common lower side. This gives it a very unique look against other ferns.
Being a Evergreen year round for the Houston area is a huge plus for this shapely formed fern with gracefully arching fronds. Its relatively fine texture sets it apart from other garden plants with less refined foliage. Once mature can be 3' tall and wide, however it is a slow grower, but well worth watching A. stndishii grow.
This fern does best in partial shade to shade. It prefers an evenly moist well-drained loamy soil for optimal growth, I have found this fern to be forgiving on the water too, on those occasions that it get to much or not enough seems to just take it in stride along with the tempiture. This is not a bog fern it cannot take standing water. It is particular about its soil conditions, with a strong preference for rich, acidic soils. Consider applying a thick mulch around the root zone over the growing season to conserve soil moisture. This plant can be propagated by division.
The nice thing too for us that live outside the loop is the deer don't particularly care for this fern either. Being a relatively low maintenance fern with light green new fronds that turn to a darker almost forest green once mature.
The Upside down fern really is a Plus Plus for us... It has no significant negative characteristics. I got my first plant about 5 years ago and it is said they can live about 15 years. So far so good!