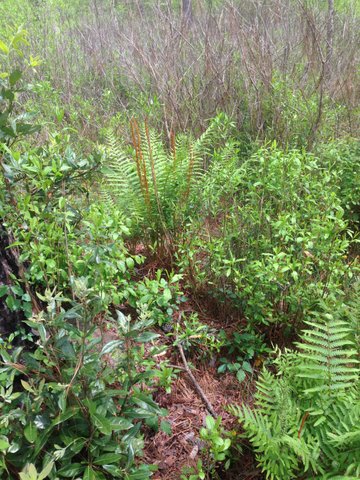 The Osmundaceae family date back to the first dinosaurs in the early Mesozoic age which was about 210 million years ago. This fact has been prove by the fossil remains it so generously left us to study. They have been in continues existence every since then. Talk about longevity.
They produced strong black root fibers that is really their erect rhizome that was so stout that the dinosaurs left it alone. Keep in mind the vegetarian dinosaurs would have been the ones eyeing those sweet crosiers and they did not want to break their teeth on the leaf steam that takes a saw to cut even now days. This fiber is so long lasting it is often used today in potting mixes. The Osmunda cinnamomea is the one we will learn about now.
The Cinnamon fern as it is most often referred to as is a specimen plant that can grow 3' wide and tall. It is a clumping fern so it is not likely to spread everywhere in your yard. It is deciduous and goes dormant in the early winter after a nice display of fall color with its yellowing leaves adding to the fall landscape. When spring arrives you will know, because this will be one of the first ferns pushing up it new year's crosiers. They come up in one massive clump of fiddleheads with their very hairy spirals un furloughing upwards. Once the crosiers turn in to your spring fronds, you will be thrilled at the arrival of the fertile fronds that will shoot up from the center and an look almost like cat tails with its green spore proudly displayed at the top. The shoots will have a brownish to cinnamon color hairs and when the spore tops have expired the turn to a cinnamon color, between the two that is how it derived its name.
For those that were able to go on last spring's field trip to the little thicket. We saw the cinnamon fern as it grows wild in the damp marshes of the thicket. We saw the spore shoots with it green spore before it released them to try to make new ferns to keep it spices alive for another million years or so.
Growing the Osmunda cinnamomea requires acid soil, moist conditions and high light. Proper spacing will allow the plant ample room to show off. Growing from spore requires harvesting the green spore and getting them sowed within just a few days. If you are not quite ready you can refrigerate and this will lengthen their viability a few days longer. The only way to keep them any longer is to freeze them. I have been told that freezing them in an ice cube works, but your still only talking a short time frame. It is amazing that it has last thought the eons of time, and the spore only last a few days. They only spore once a year, so if you miss it, you wait until next spring when the life cycle starts all over again.
The Cinnamon fern that we will have for the members will be a 4" potted dormant plant. You need to keep it just moist until it shows signs of life. If you elect to plant it be sure and keep the crown above ground level. It will still need moisture to keep it alive, but you do not want it to root because it is not using the excess water to support active growth.
This is a sturdy fern and is sure to give your garden delight throughout its growing season. It is a strong grower and should be placed where you don't need to move it so it will reach its full potential, and it will reward you for years to come. Hey it out lasted the dinosaurs...