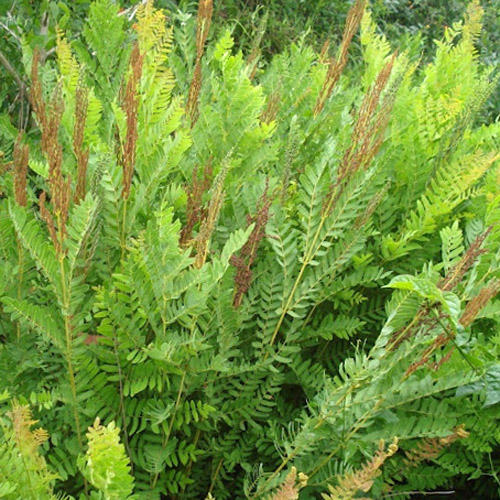 The Osmunda regalis European is best known to us at the Royal fern. It is a Old World fern that has also been called the 'Flowering Fern'. With Old World ferns comes folklore and this fern comes with its fair share.
The first folklore starts with the name its self. Osmunda-
Some derive the name from the Saxons Os- means House and Mund - means Peace, so House of Peace.

Others think the name was based on the fairy maid 'At Loch Tyne'. Back in the time the Danes were invading and raising havoc throughout the land. One family living at that time was a man named Osmund , his wife and their daughter who was said to be the fairest of maidens. On one such raid a man heard of their coming and fearing for his women rowed them to an island that was covered with the Great Royal ferns. The ferns reached the heights of 10 feet tall and he had his wife and daughter laid down under these great ferns and hid. Later when it was safe he returned to retrieve his wife and daughter and they were safely waiting for him. When the maiden grew into a woman, she refered to those Tall ferns as the Osmond after her father.

Regalis is a Latin word that means Royal or Kingly, this has to be for the majestic appearance of the fern.

Further folklore is that if you eat the very first crosier as it comes up in the spring, you will be tooth ache free for the full year. Don't you know that the fern must have almost become extinct from the local dentist trying to save their business. Ah lucky for us that it was pre-dentist.

The 'Flowering Fern'. We know from our studies of ferns that they do not flower. So where did this nickname come from? In the spring the new fronds push up and as the uncurl and put on their leaves the top have of the frond will be so completely covered in sori that it appears to be a bloom. It will first look green as this is another green spore fern, and then as it ages it turns a rusty to brown color. This explains the confusion of long ago.

The folklore on the height of the fern was not lore, but true they can grow up to 10 feet, but normally they will be in the 3-4 foot range. The taller ferns are on very old growth that has been established for years and the trunks have grown to be a foot to two feet talk. Not to say in a few years some of us might have one to really show off. This is a clumping fern and only puts of a few rare offshoots. It does not grow as wide as it does tall, only a couple feet wide.

The Osmunda fibrous trunk is used for mounting Orchids on as it is a very tough and durable substance. It takes a saw to cut through the truck. So dividing these is no simple task. You're going to need a really sharp shovel once they get grown.

The Royal fern is considered a bog fern, liking very moist to wet soil. The soil should be high acid so plenty of peat or pine needles to give them the nourishment the require. High light will work for this fern as well. The European Old World Regalis has a much thicker sturdier steam than the New World counterpart we have here in the States. When fall comes so does the fall colors as it turn yellow to brown we know that next year we will experience the rebirth all over again.